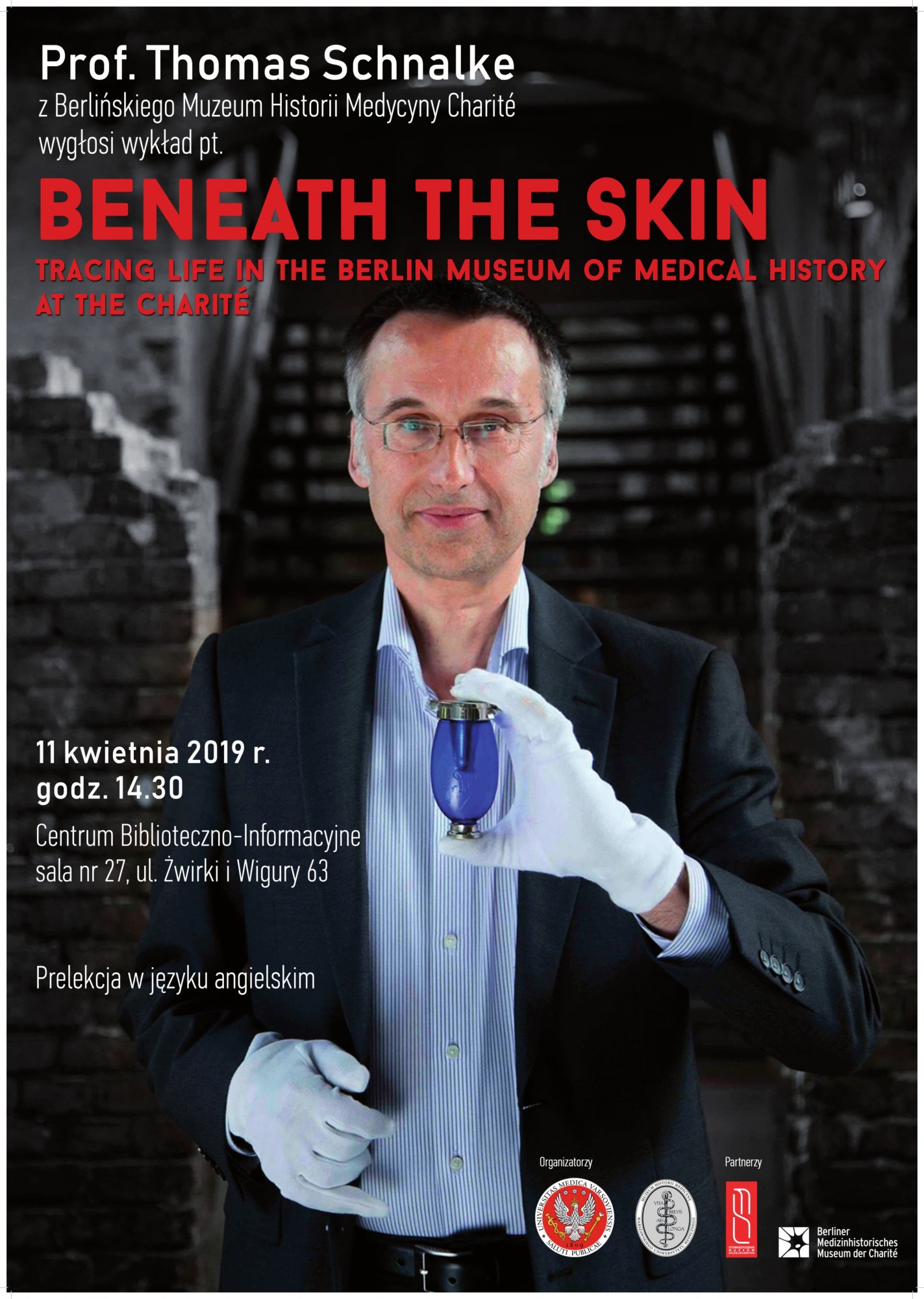 The lecture will begin at 2.30 p.m. on Thursday 11 April 2019 and will take place in Room 27 in the Library and Information Centre (Centrum Biblioteczno – Informacyjne) building at 63 Żwirki i Wigury Street.

The lecture will be in English.

The Berlin Museum of the History of Medicine at the Charité is one of the most famous European museums with a medical profile. It is located on the site of the Charité Hospital, in a building which was commissioned by the famous pathologist, Professor Rudolf Virchow. At the exhibition you can learn not only about the history of the hospital and the history of medicine in Germany, but also view the many pathological preparations collected by physicians in Berlin over many decades. In recent years the Museum has organized many interesting and unusual temporary exhibitions showing the connections between medicine and art, as well as forensic science and death. This year, on 21 March 2019, another exhibition opened in Berlin devoted to the famous surgeon, Ferdinand Sauerbruch. Since 2000 the post of director of the Berlin Museum of the History of Medicine at the Charité has been held by Professor Thomas Schnalke, whom we shall have the pleasure of hosting in Warsaw in April. During his lecture he will talk not only about amassing medical collections, but will also present his vision of managing a modern museum of the history of medicine, whose name is recognizable throughout the whole world.

Prof. Thomas Schnalke (b. 1958), is a medical historian. He studied medicine in Würzburg and Marburg. He was awarded a doctoral degree in 1987 when he defended a thesis on the history of medical moulage (models in wax of skin lesions, tumours and other pathological skin diseases). In 1993 he obtained his post-doctoral degree in the history of medicine. His research was on urban medicine in German-speaking countries in the eighteenth century. After returning to Berlin in 2000 he began an intensive study of the history of amassing anatomical and anatomical and pathological collections. Under his leadership, many interesting exhibitions on the borderline between medicine, art and forensic science have been organized at the Berlin Museum of the History of Medicine at the Charité. In recent years these have included: HIEB § STICH Dem Verbrechen auf der Spur (2016–2018) and ScheinTOT – Über die Ungewissheit des Todes und die Angst, lebendig begraben zu werden (2018). Professor Schnalke’s most important publications include: Diseases in wax: the history of the medical moulage, Berlin 1995; Medizin im Brief : der städtische Arzt des 18. Jahrhunderts im Spiegel seiner Korrespondenz, Stuttgart 1997; and Dem Leben auf der Spur im Berliner Medizinhistorischen Museum der Charité: Dauerausstellung / Charité, Universitätsmedizin Berlin ; Berliner Medizinhistorisches Museum der Charité, Berlin 2010 (co-authored with Isabel Atzl).

Admission Free!
We invite you to join us!