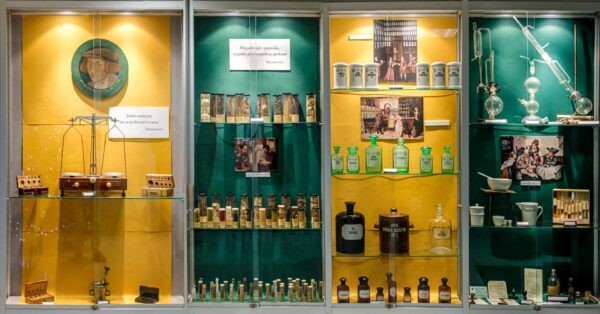 Since Monday 14th DEC, in front of the Senate Hall on the first floor of the Rector’s building, we are presenting an exhibition entitled “In the footsteps of Asclepius and Paracelsus”. The exhibition was prepared based on of the collections of the Museum of the History of Medicine of the Medical University of Warsaw and is intended to show two worlds: medicine and pharmacy. The artefacts on display have been divided according to several thematic groups. In the pharmaceutical part of the exhibition, the first set are pharmacy containers from the first half of the 20th century; corresponding with this are sets of preparations with plant raw materials used in the production of drugs . Another cabinet displays laboratory equipment used in pharmacy. There are also original medical rubber stamps and prescriptions from the interwar period along with a few examples of drugs – for example, Neosalwarsan, which was an effective remedy for syphilis (before penicillin became popular). In the medical section you can find tools and items related to ophthalmology, surgery, laryngology and cardiology, e.g. original glasses from World War II and instrument for measuring blood pressure (sphygmomanometer) from around 1900. The exhibition is supplemented by copies of medical-related paintings – pharmaceutical and two portraits of Asclepius and Paracelsus painted on wooden panels, which are partof a pharmacy cabinet from the beginning of the 20th century.

The authors of the exhibition are Krzysztof Schoeneich and Zuzanna Kamińska.

📷 Krzysztof Gardulski, Photomedical Department of the Medical University of Warsaw