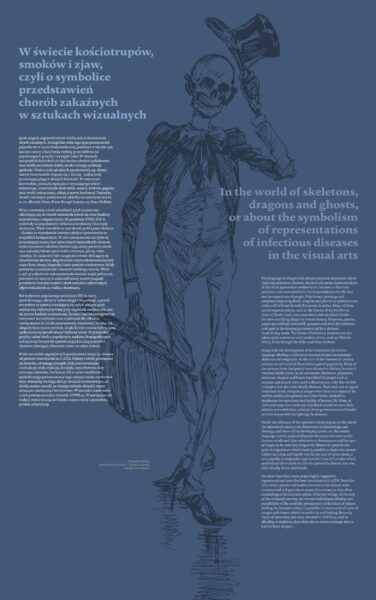 The language of allegory has always played an important role in depicting infectious diseases. In particular many representations of this kind appeared in mediaeval art, because at that time pestilence was associated with a divine punishment for the sins and transgressions of people. Polychrome paintings and sculptures depicting devils, dragons and ghouls as epidemics can today still be found in early European churches. Many of these sacred representations, such as the famous danse macabre (or Dance of Death) motif, were associated with the Black Death – the most terrifying plague in human history. Emperors, queens, popes and ordinary townsfolk, peasants and even the homeless took part in the dancing procession led by a skeleton symbolizing death. The theme of infectious diseases was also taken up by numerous early modern artists, such as Albrecht Dürer, Peter Bruegel the Elder and Hans Holbein.

Along with the development of the visual arts, the artistic language alluding to infectious diseases became increasingly elaborate and enigmatic. At the turn of the nineteenth century caricatures and satirical illustrations gained popularity. Many of the pictures from that period were devoted to cholera, because it wreaked deadly havoc on all continents. Skeletons, phantoms, monsters, dragons and beasts least liked by people such as serpents and insects were used to illustrate not only this terrible contagion but also other deadly diseases. Their task was to signal imminent death. Allegorical images were often accompanied by scythes, sickles, hourglasses and other vanitas symbols to emphasize the transience and futility of human life. Many of these paintings also made use of political motifs because their authors concealed their criticism of the governments and health services responsible for fighting the diseases.

Under the influence of the symbolic trends popular at the end of the nineteenth century, the discoveries in bacteriology and virology, and above all the developing poster art, the artistic language used in medical allegories became even more varied. Ancient motifs and clear references to Renaissance and Baroque art began to be used very frequently. Historical symbols also grew in importance which made it possible to depict the chosen subject in a clear and legible way. In the case of tuberculosis, a very popular iconographic sign was the cross of Lorraine which symbolized the crusade to curb the spread of a disease that was still a deadly threat worldwide.

For more than forty years, many highly suggestive representations have also been associated with AIDS. From the very outset, posters and leaflets devoted to the disease were controversial and gave rise to many discussions, as they often touched upon the intimate sphere of human beings. At the end of the twentieth century, the virtual world began offering new possibilities of the symbolic presentation of this kind of subject. Surfing the Internet today, it is possible to come across all sorts of images and memes related to medicine and healing. Recently, many of them have also been devoted to COVID-19. And in alluding to tradition, they often use an artistic message that is known from the past.