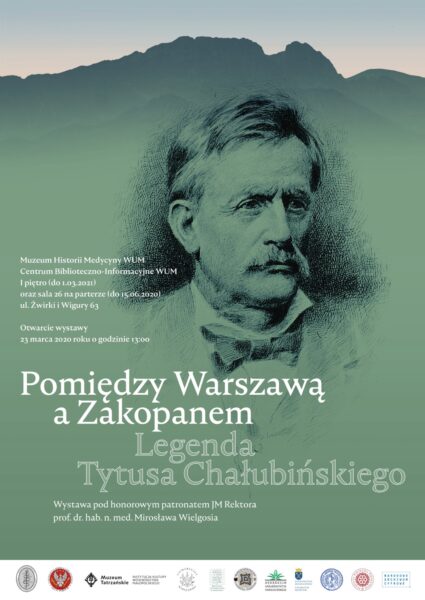 The young man, who came from Radom, attended the Academy of Medicine and Surgery in Vilnius at a time when Polish historical events painted a bleak picture. His medical studies, which he initially chose without any real enthusiasm, provided him with knowledge and directed him to activities which led to him being seen as a living legend in both Warsaw and Zakopane; he was their saviour and helper. By studying medicine and botany concurrently, first in Würzburg and later in Dorpat (now Tartu, Estonia), he marked out the paths of his adult life – becoming a doctor by profession, a botanist by his passion.

His contemporaries emphasized his remarkable intuition and big heart towards every patient he cared for. His total commitment to helping others can be seen in the content of his letters, which are very often diagnoses and prescriptions, in which he tries to gain a deeper insight into another person’s problems and find a solution for them. He did not leave behind any ground-breaking discoveries, large numbers of scientific papers or ‘milestones’ in the field of medicine, however, all the memoires about Tytus Chałubiński return to the subject of his great dedication to the cause and to his great energy. This may have been the reason why the legend arose of a doctor treating hopeless cases, of a fearless mountain climber in the Tatra mountains and a patron who supported the development of the highlands and everything connected to them. Verifying his achievements is probably not as important as taking a closer look at his biography and interests. An indisputable fact is that he was a fine example of someone in pursuit of the ideal of a 19th-century physician, whose distinguishing feature was his social sensitivity, titanic work and a hunger for knowledge of the world that went far beyond his professional fields. These aspirations were also perceived by his students.

Connected to the Imperial-Royal Academy of Medicine and Surgery in Warsaw, and later the Main School in Warsaw, he was popular among young medical students who appreciated his well-prepared lectures. This was reflected in the suggestions put forward in the second half of the 20th century to name the Medical Academy in Warsaw after him. This plan did not come to fruition, however Tytus Chałubiński was commemorated in a different way in the academic world: the Dr Tytus Chałubiński Medal is awarded by the Medical University of Warsaw to people and institutions who have distinguished themselves in medical and didactic activities.

Admission free!
We invite you to join us!